Fruzsina Gárdos-Orosz, Zoltán Szente (eds), Populist Challenges to Constitutional Interpretation in Europe and Beyond (Routledge, 2021) has just been published 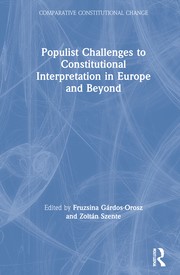 Part II on “Constitutional interpretation and populism in Europe” examines the topic from a comparative perspective representing those European countries where populism is most prevalent, exploring how populist political aspirations have affected the way of constitutional interpretation, namely in Austria by Konrad Lachmayer, Czech Republic by Zdeněk Kühn, Croatia by Djordje Gardasevic, Greece by Apostolos Vlachogiannis, Hungary by Fruzsina Gárdos-Orosz, Italy by Gianmario Demuro and Riccardo Montaldo, Poland by Wojciech Brzozowski, Romania by Alexandra Mercescu, Spain by Francisco Balaguer Callejón and United Kingdom by John McEldowney.

Part III extends the focus to the United States, reflecting how American jurisprudence and academia have produced the most important contributions to the theory of constitutional interpretation, and how recent political developments in that country might challenge the traditional understanding of judicial review (Mark A. Graber and Martin Loughlin). This section also includes a general overview on Latin America, where there are also some populist governments and strong populist movements (Pablo Riberi). Finally, the editors’ closing study analyses the outcomes of the comparative research, summarizing the conclusions of the book.

Written by renowned national constitutional scholars, the book will be essential reading for students, academics and researchers working in constitutional law and politics.

Fruzsina Gárdos-Orosz is Director and Senior Research fellow of the Institute for Legal Studies, Centre for Social Sciences, Hungary, and also Associate Professor in Constitutional Law at the ELTE Law School in Budapest, Hungary.

Zoltán Szente is Professor of Law at the Department of Constitutional Law, National University of Public Service, and he is a Research Professor at the Institute for Legal Studies, Centre for Social Sciences of the Hungarian Academy of Sciences, Budapest.

The editors are the co-chairs of the IACL Research Group on Constitutional Interpretation.